Internet Mail Overload is an accompaniment of Information Overload. The never ending progress of electronic information intercommunion is often based on electronic mail messages, while the amount of email messages an individual receives grows day by day. In 2002 about 440,606 terabytes were sent by email. Assuming an average mail size of 15 kilobytes and about 600 million people having Internet access the consequence is that an average individual receives about 50,000 emails a year (about 136 emails per day).

Evolution
Frank Heart, the Manager of the BBN Team team which designed and built ARPANET once stated in an interview in 1995:

The success story of email grew up with the evolution from the ARPANET in 1969, via the dialin Bulletin Board Systems (BBS) in 1978, via the USENET (UUCP News) in 1980, up to the introduction of the World Wide Web (WWW) in 1993. 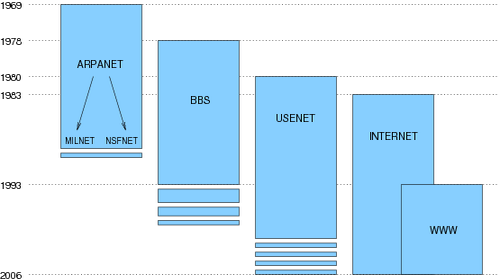 Advanced Research Projects Agency Network
The so called ARPANET, developed by the US Department of Defense was built by the end of 1969 to keep up communication in case of a nuclear war. The idea of a nuclear attack resistant network is just a myth. The original idea was to build up a network designed to survive network losses. After the introduction of the ARPANET it greatly proved it’s value. More and more nodes (Agencies, Universities, and Research Institutes) were connected to it (see figure [internethosts]), discovering new subnets. In 1971, 75 percent of the traffic in the ARPANET was email.

Bulletin Board Systems
In the year 1978 the first Bulletin Board System (BBS) went online. The increase of popularity was reached by offering the so called Bulletin Boards (BB), similar to newsgroups and forums known in our days. The BB systems often were non-profit dialin servers, building up BBS networks, sharing information and passively reaching access points to other network infrastructures, like the ARPANET and the later Internet. The new possibility to write email like messages, send files and reach shared information was quickly well proven, mostly by private users.

USENET
Following the paradigms of the ARPANET and BBS the so called USENET came up in the early 1980s. The USENET offered an enhanced way of handling forums, the newsgroup (NEWS) – evolved from the BBS forum idea. This was the first time information was structured into unique categories, accessible for anyone running a NNTP (USENET) news client software. The media email and file transfers inter-network were widely available, to USENET users, ARPANET users, BBS users, and even Internet users.

Internet
Technically the Internet was born on January 1st, 1983, when the first TCP/IP88: Transfer Control Protocol / Internet Protocol packets (IP) were used to connect nearly all known networks, including ARPANET, USENET, NSFNET, the educational and commercial networks like BITNET and X.25, and the later Compuserve and JANET networks. This was the era of new protocols like SMTP which allowed sending emails like known today.

These new ideas made it possible (and well proven) to easily exchange all kinds of information. The popularity of information intercommunion resulting from the WWW (Internet) led to problems this thesis focuses on.

Decentralization
The Client-Server idea led to a big growth of the World Wide Web. New services were built, serving clients all over the world, making it possible to remotely exchange data and information of any kind.

Networks may link the geographically separated subcritical foci of cognition in the developing world with the concentrated supercritical centers of the developed world, bringing the former deeply into the interaction patterns of the latter and making it much easier for the former to grow and advance.

Using the WWW allows being at place A, using services at place B, no matter where B is. The geographical decentralization in combination with the WWW Client-Server Concept accelerated the growth of electronic data intercommunion.

Scope
Writing emails across border lines is a feature well proven by every society on this world, apart from the type of the respective society. The world scope (see figure [imap1997]) of WWW participants] reached nearly all countries – in 2006 there are only about 5 countries not fully connected.

Origin and Value
There are several kinds of origin sending email, increasing the total amount of email a user receives day by day. The distribution of the origins changed significantly over the past years, following the progress of introduction of new (email) networks with new capabilities (see figure [eorigins]). 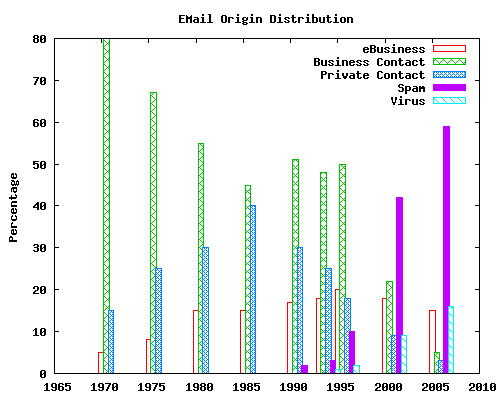 eBusiness Systems
The eBusiness Systems make intensive use of the media email. Email sent is not only email invoked by the user, furthermore the systems themselves exchange data (information) using the simple concept of email. These systems send (fully automated) emails reporting status, notifications, order information, and provisioning orders. 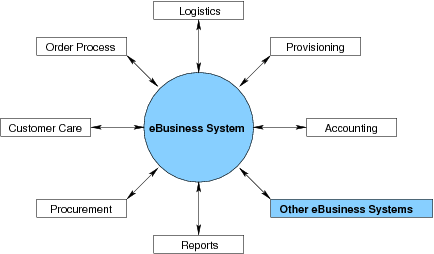 Ordering a book online is a good example for an eBusiness email workflow: The customer chooses a book in the online shop and presses the button ‘order now’. Assuming (for ease) the customer is already registered in the database the eBusiness System (the Online Shop) saves the order information. The latter is sent to the logistics department. The system sends an email to the customer that the order has been confirmed and now is being processed. After the logistics department has sent out the book another email is sent to the customer – containing a message that it was despatched and will arrive within the next days. The eBusiness System is notified that the order has successfully been processed. Now one book is missing the journal and a new one has to be ordered – hence an email is sent out.

Business contacts
Business contacts were the initial use since the introduction of the ARPANET. The ability to communicate and share information worldwide made it possible to decentralize the participants. National, international, and intercontinental companies, and research institutes as well, were now able to work effectively together. The Internet Email Use of business contacting has wide spread since, growing each year, following the trend of Globalization.

The proven value is:

All done by email.
Friends
Together with the Business Contact use of the media email the private use raised. New friendships arose, disregarding the geographical distance, crossing border lines, since the beginning of the era email. Beginning with simple greetings, the gamut was run from (small) talking, planning private happenings, inviting, and sharing up to sending fun media and chain letters. Today nearly every individual connected to the Internet has (at least) one email account.
Spam
The growing use of email is considered as an ongoing trend. This was quickly noticed by untrustworthy users who spotted a huge market place with the capability of quick and cheap advertising. The evolution of unsolicited advertising (formerly known as Spam Email) is a sad success story. Spam email makes about 75 percent of the total email amount in our days. This annoying side-effect of the Internet has reached new dimensions. 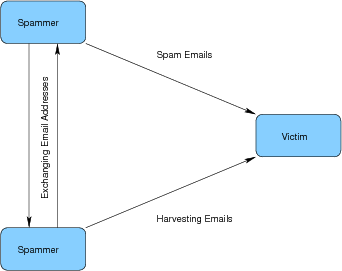 The market Spam has grown so much, that new markets serving the Spam lobby emerged. Spam in our days is not only unsolicited advertising, furthermore a great deal of Spam email is Harvesting Email. This type of mail pretends to be Spam email (see figure [spamandharvesting]), but has the aim to collect and verify new email addresses (to put on the spam receivers list in the future). The business is to sell big amounts of verified and therefore valuable email addresses, often categorized by target interest.

Viruses
Along with the problem Spam came the so called Email Worms, a new generation of computer viruses. Except from the usual claim a computer virus causes many of the Email Worm viruses use the infected machine as a zombie bot. These bots are a part of a network of infected machines, controlled by the spammer. The zombie bot reads all local mail and address books, extracting explicit information and saving and distributing all found email addresses. Full control over a zombie bot means to be able to automate harvesting and spamming] very effectively (see figure [botnets]). 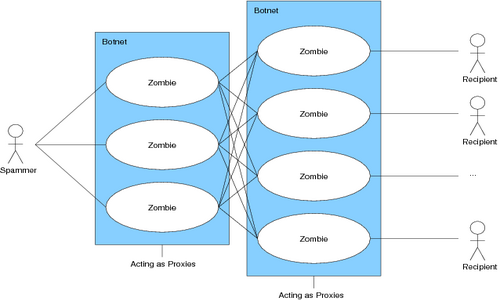 Time Degression
Along with the promotive conditions email became a big deal of today’s Internet usage. Assuming 50,000 emails an average user receives a year, upward drifting, the amount of information may overwhelm the individual. Participating in several projects, having responsibility in several circumstances, results in a big amount of time managing this information. Back to the cite of Licklider and Vezza the society will remain future shocked.

Good morning Mr. Foo, you got 817 urgent mails. After reading and answering your mail your meeting will start in 15 minutes.